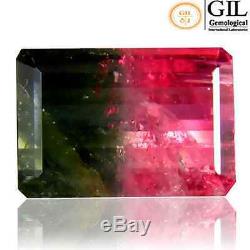 7.05 cts GIL-Certified Natural Octagon-cut Watermelon/Green&Pink VVS2 Tourmaline (Mozambique) New without Tags. This gem has never been used/placed/set in a setting. It is utterly undamaged, unmarred and in perfect condition as expected of NWOTags.

I have included a Tourmaline article below for your appreciation and enjoyment. Tourmaline gemstones can be found in all colours of the rainbow. Owing to its wide range of colour availability, tourmaline is considered to be one of today's most versatile gemstones.

Most tourmaline gemstones display two or more colours in a single stone (or two tones of the same colour). Tourmaline exhibits strong pleochroism, which means its crystals can exhibit different colours depending on the angle from which they are viewed.

Which is coloured by copper. Most tourmaline is completely untreated. Shape: Octagon-cut Dimensions: 13.04mm x 9.07mm x 5.78mm Weight: 7.05 cts Luster: Excellent. Everybody Loves Watermelon on a Hot Day. Green and Pink, Cold and Wet. Munchy and Sweet, Heavy and Colorful. So what the heck is a Watermelon Tourmaline? God's Joke on Jewelers&Gemologists&Botanists? No, a rare gem cut from colorful Tourmaline rough. Right where Green&Pink Meet&Greet on the inside. Tough to Mine, Mean to Cut, and Lots of Waste. Unique among Gems, Rare to Find, and Never Sweet. We have One for you to Cherish and Display. But Never Bite into It or the Joke's on You! Stay here, look around and learn.

We pride ourselves as good-spirited folks having fun and doing our best to share the joy of Nature's most beautiful and enduring literal treasure -- Natural Gemstones. Expect to find us cheerful and trustworthy, and we will expect the same of you. About Tourmaline - History and Introduction. Is the gemmological name for an important group of complex gem-quality boron silicate minerals.

Its name is thought to be derived from the Sinhalese word, "turamali", which means "stone with various colours" in reference to its extreme versatility. Tourmaline was first thought to be used as a gemstone around the 1500s, but distinct mineral species were not actually described until the 1800s. An American mineral collector, introduced green tourmaline from the Mount Mica mine in Maine, USA. Which sparked an interest in tourmaline and led to its popularity (along with other semi-precious gemstones) on the mainstream jewellery market.

Include dravite, uvite, schorl, liddicoatite and elbaite. Schorl is the most common variety, making up nearly 95% of all tourmaline deposits, but it is not often desired as a gemstone.

Most tourmaline gemstones are varieties of the elbaite family. Since tourmaline consists of a very large group of related gemstones, most tourmaline is traded under very colour-specific varietal names.

Tourmaline has very distinct gemmological properties which can help identify it from other similar coloured gemstones. Tourmaline has superior hardness (7 to 7.5 on the Mohs scale), poor cleavage and strong pleochroism. Tourmaline is known to exhibit unique pyro-piezoelectric properties, which means crystals can produce and hold an electrical charge when subjected to mechanical stress, pressure or extreme temperature fluctuations, earning it the nickname of the'electric stone'. When tourmaline crystals are rubbed, friction can cause static and when held over dust or ash, the static can attract particles, which is why it is sometimes referred to as the'Ceylonese (Sri Lankan) magnet'.

Tourmaline is found in pegmatites and alluvial deposits all over the world. Tourmaline is the national gemstone for the United States, where it has been mined for centuries. In fact, up until the early 1900s, the United States was considered the primary source for fine tourmaline. Today, the most significant tourmaline deposits come from Minas Gerais and Bahia, Brazil. Other notable tourmaline sources include Afghanistan, Australia, Burma (Myanmar), India, Italy, (Elba) Madagascar, Malawi, Mozambique, Namibia, Nepal, Nigeria, Pakistan, Russia, Sri Lanka, Switzerland, (Tessin) Tanzania, the United States (California and Maine), Zaire, Zambia and Zimbabwe. Tanzania is known to produce fine emerald-green chrome dravite tourmaline, and in the late 1990s, a copper-bearing blue paraiba tourmaline was discovered in Nigeria; shortly thereafter, another deposit of a copper-bearing paraiba tourmaline was discovered in Mozambique. Both of Africa's paraiba tourmaline deposits were not as intensely coloured as Brazilian materials. Zambia is known for producing fine red rubellite and yellow canary tourmaline, while Afghanistan is famed for producing fine green verdelite and rare blue indicolite. Tourmaline can occur in a wide range of colours from colourless to black.

Colourless tourmaline is considered to be the rarest, but it is also the least valuable tourmaline. Is actually the most common colour occurrence. Tourmaline crystals that exhibit green on one end and pink to red on the other are marketed as'watermelon tourmaline'. Most red, pink and brown to yellow tourmaline is coloured by manganese, while iron and titanium can result in greenish to bluish-black colours. Lithium impurities can result in just about every colour, including blue, green, red, yellow and pink.

The rare emerald-green chrome tourmaline is coloured by chromium (and sometimes vanadium). Many pink tourmaline crystals obtain their colour though a natural irradiation process. Cat's eye tourmaline is typically green or pink in colour, although it can also occur in other rarer colours too. The most valuable and rare tourmaline. Is neon green-blue paraiba tourmaline. Other valuable colour combinations include purplish-red'rubellite' and blue' indicolite. Colour intensity and saturation are the most important factors. Tourmaline is typically transparent to translucent.

Opaque material is common for cat's eye tourmaline and schorl. According to GIA, most tourmaline is'Type II' material in regard to clarity, which means tourmaline is often included. The level of inclusions can vary depending on the type of tourmaline, with some colours being more heavily included than others.

Is usually translucent to opaque and owes its chatoyancy to thin needle-like inclusions. When cut and polished, tourmaline exhibits a vitreous to sometimes slightly resinous lustre. Tourmaline is often cut into long rectangular bar shapes because of its elongated crystal habit. However, tourmaline is also available in various traditional and fancy shapes and a range of cutting styles. Due to the strong pleochroism of tourmaline, lighter coloured tourmaline is typically oriented with the table facet perpendicular to the main axis, in order to display the richest hue.

However, some stones may be heated to improve colour and clarity. Yellow, pink and red varieties of tourmaline may be irradiated to enhance colour, although irradiation is nearly impossible to detect and does not normally affect value. Heavily included rubellite and paraiba tourmaline may be clarity enhanced.

The item "7.05 cts GIL-Certified Natural Octagon-cut Watermelon/Green&Pink VVS2 Tourmaline" is in sale since Sunday, September 6, 2015. This item is in the category "Jewelry & Watches\Loose Diamonds & Gemstones\Loose Gemstones\Tourmaline". The seller is "captej2012" and is located in Canyon Country, California.

This item can be shipped worldwide.